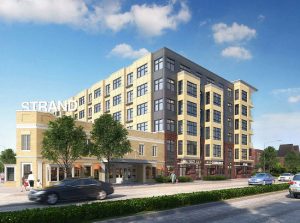 BBEI is once again teaming up with WCS Construction to provide ACM Panel Accents and roof level custom Screen Wall to the Strand Residence.  The Strand Residence is a residential mixed use building to be built adjacent to The Strand Theater located in Northeast Washington DC.

The Strand Theater was opened in 1928 by an entrepreneur and racial equity champion Abe E. Lichtman.  This theater was the first motion picture theater constructed east of the Anacostia River principally for African American patrons. For more than 40 years, the Strand was a center of community social life.  The building laid abandoned for some time, later being named an Endangered Place by the D.C. Preservation League in 2008.

In 2010, The Strand was added to The National Register of Historic Places.  There are plans to revitalize the Theater contemporaneously with the construction of The Strand Residence.  Benchmark is proud to be part of this exciting Project!

BBEI is once again teaming up with WCS Construction to provide ACM Panel Accents and roof level custom Screen Wall...

Wishing Jonathan all the Best!

Today Jonathan Paulding is leaving our team to pursue his dream to become involved in Preconstruction on the General Contractor...

We have relocated our Team’s Headquarters and Shop! Our new address is 5304B Kings Court, Frederick, Maryland, and we occupy...